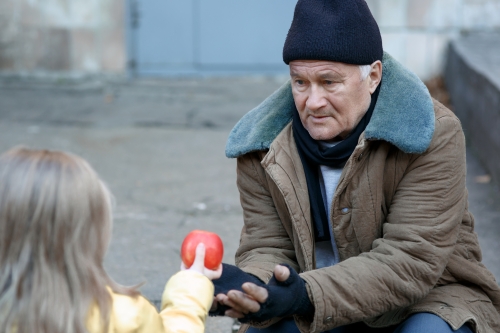 I was checking the second grocery store to see if they had the sprouted wheat bread I couldn’t get at Walmart.  They didn’t have it either.  I got in my car and saw the guy on the sidewalk in front of  me trying to stack two large and heavy boxes full of whatever he had just bought on the handlebar.  He was shorter than I am and couldn’t see over one box, much less two.

I got out of my car and told him there was no way he was going to transport those groceries in one box or even get two boxes on the handlebar of his bicycle.  I asked him where he lived.  It was a little more than two miles and the first one would be down a steep hill.

He said he could do it.  I replied, “Not with me here.  You will put those boxes in my car and put your bicycle somewhere safe.”  I saw that he had a lock and cord to attach his bicycle on the side of the grocery store to something there.

He started loading the boxes and the first one he put in the back seat didn’t allow enough space for the second one so I moved it.  It was so heavy I couldn’t pick it up and I am considered by some to be a strong person.

After both boxes were in and he was sitting on the passenger seat in my old Honda, I asked for directions.  We chatted on the way and I learned that he was in his 50s and that his partner was in the hospital.  I asked why and he said, “She couldn’t get up this morning.”  He doesn’t yet know why.

He took the boxes inside and finally got his dog to go inside.  He saw me sitting in my car and I said, “Get in the car.  I’m driving you back to get your bicycle.”

He couldn’t believe it!

We chatted a little more on the drive back to the grocery store.  He asked why I didn’t have anything from shopping and I told him that I was seeking the organic sprouted bread there because Walmart didn’t have it.  He didn’t know what organic meant so I was happy to teach him.

I introduced him to the Environmental Working Group (EWG) which tests fruits and vegetables every year for pesticides and that they have a “card” you can carry with you to a grocer when you shop for food.  He had never heard about that.

When we got to the grocery store, I told him he could have mine.  I explained what it meant and gave him my card.  I told him to carry it with him when he shopped.

He thanked me again for driving him with his boxes and then driving him back so he could get his bicycle.

Is this an example kind of  “compassion”?  I believe it is.  I also believe that each of us is here to serve others however we can.  It’s good to be kind to everyone but it’s so much better to do something that helps them.  Sure, we do this with our family and friends but what about strangers?

Have you helped a stranger recently? Tell us about it.

This entry was posted in life and tagged comp[assion, help a stranger, personal story. Bookmark the permalink.