About Part 24:  I was upset by the fake news in the QAnon video, and so I took action by checking the facts and sharing what I found, including tweeting.  But they just made another one full of untruths.  I can see now that it’s futile to play this game—not because they’re right, but because they are supported by “Big Money” to make and advertise those videos, and I’m just a poor, retired teacher.  This was an example of “resistance is futile” (The Borg, Star Trek Next Generation).

Now, I want to write about taking action that was successful.  First, I’m sorry I didn’t take “before” photos–that you can’t see how it was then.  All these photos were taken after the bushes were trimmed and the grass was mowed.  When I was walking the trail before it was maintained, I wanted to do it quickly because it got creepier and creepier.  I did not take the time to document the amazing growth. As you read, please try to imagine what it was like.

In Part 21, a previous post about the Sulphur Creek Trail, I wrote that “…everything is scary because it’s dark from the shade of the tall trees filled in with bushes and vines.” I’m from Colorado where the flora is quite different.  It’s not lush, not jungle-like, and certainly not as bright green as it is here. 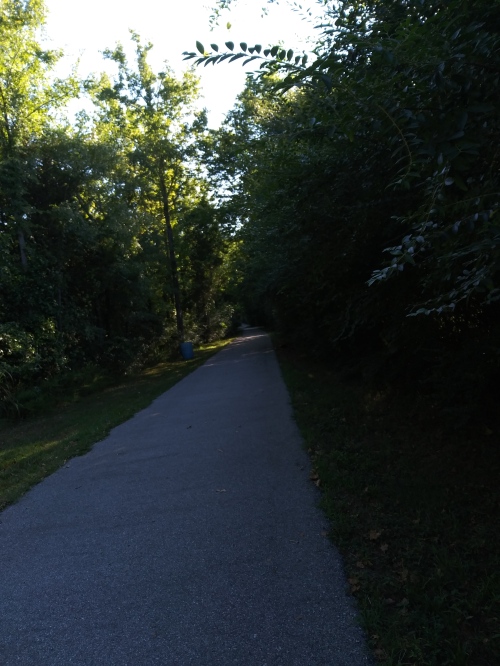 That “creep factor” continued the past several months as it rained, and the grass grew taller, and the bushes got denser.  You can see how the flora takes over in this photo of a telephone pole covered with vines. 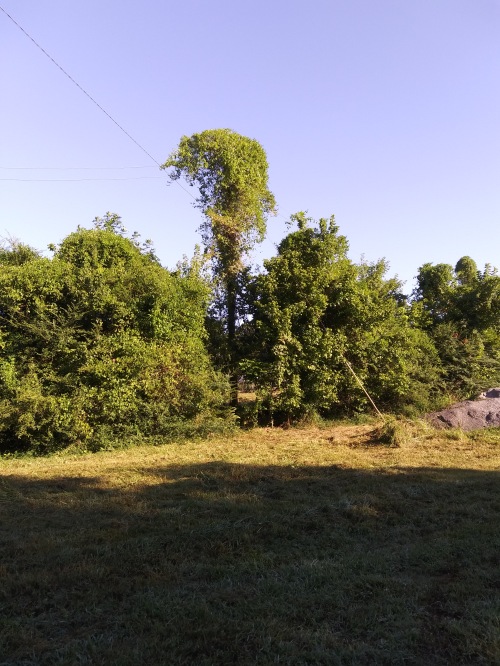 Then one day, I saw two men and a jeep on the trail (!) by the trash bag of clothing and other personal belongings.  That pile of stuff by the trail escalated the creep factor for me for the past several weeks.  Were homeless people still camping in the bushes on the sides of the trail?  Was it a sign that something terrible happened to them?

As I approached them, I put on my mask and asked if they were camping.  I would go no further if they were.

They both laughed, and said, “No.”  So I got closer and asked what they were doing.  They said someone had called about this mess, pointing to the broken bag of personal belongings and other things, and they were here to clean it up.

I asked who they worked for and they replied, “Greers Ferry Trail Council (GFTC).”

“Do you maintain the trail, as in cutting the grass?”  And I explained how it was waist-high in some places and the bushes were leaning into the trail.

The older man said, “We have volunteers for trimming the bushes, but mowing the grass is the city’s job.”  He suggested that I contact the GFTC online.

I did: twice.  But the bushes got creepier and the grass grew taller, up to my shoulders. 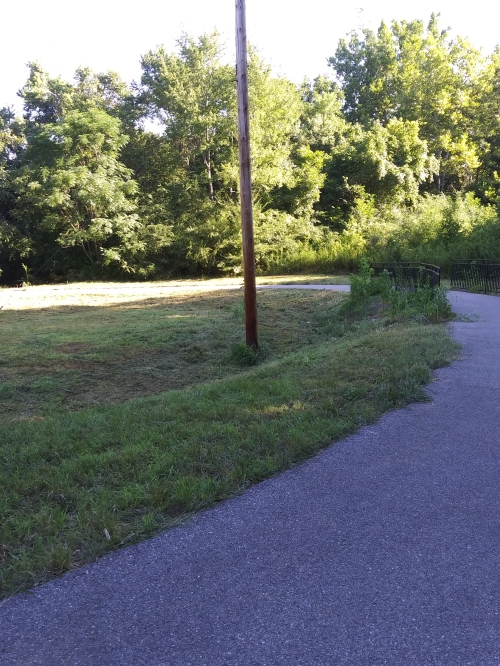 I couldn’t see who was coming around the bends in the trail, and I was concerned about snakes.  Several people had cautioned me to use a walking stick in case one was on the trail.  I had seen little snakes in the creek and on the rocks there, but never on the trail.  As the grass and bushes grew, the thought of encountering a snake definitely contributed to the creep factor.

But one day, I saw a man cutting back the bushes.  There were piles of trimmings next to the trail and a tarp on the ground almost full of his cuttings.  He introduced himself as Bill, and we talked for a while.  He’s a volunteer and a cyclist.  I told him about the cyclists who almost ran into me because they were riding side-by-side and talking.  They didn’t see me because they were looking at each other.  But there was no way I would step off the trail into that brush and high weeds, so I got their attention with a shrill whistle. 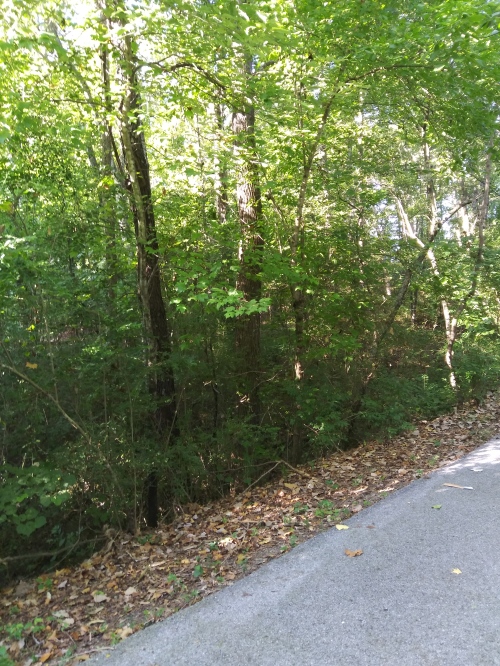 I told him about the River Trail in Durango and how they finally painted a yellow line down the middle, like their roads have for cars, to keep cyclists from riding abreast.  And those local cyclists are taught to either ring a bell or announce, “On your left” so people who are walking know they’re coming from behind.

He liked those ideas and said he’d do something about it.  He leads some cycling group that is working on another trail just for cyclists.

Walking the trail a few days later, I saw a man on a riding mower, cutting the grass!  I got his attention and put my hands together in a gesture of thanks and bowed to him.  He nodded and waved. 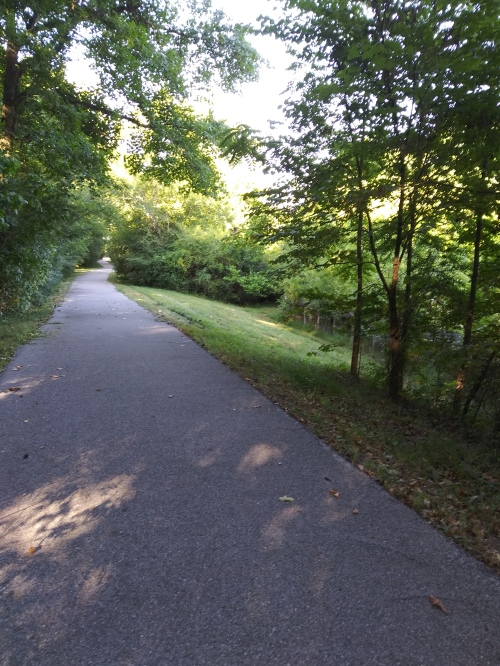 As I continued walking, I was delighted to see that the rest of the trail had already been mowed. 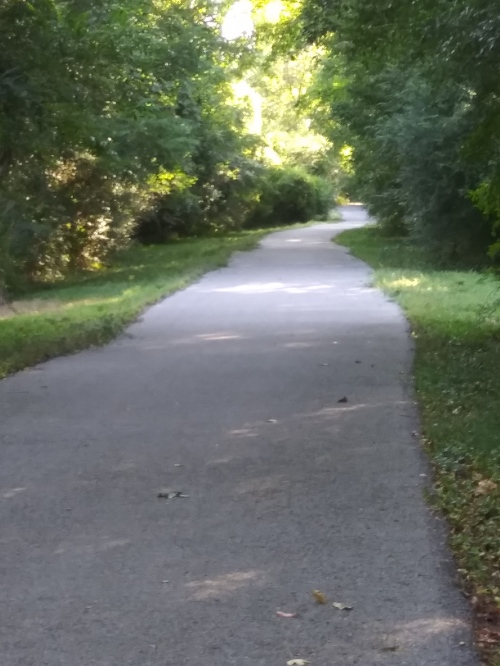 And, all the dead leaves in one part of the trail–inches-deep leaves that could easily have been hiding snakes–had been removed.  Whew! 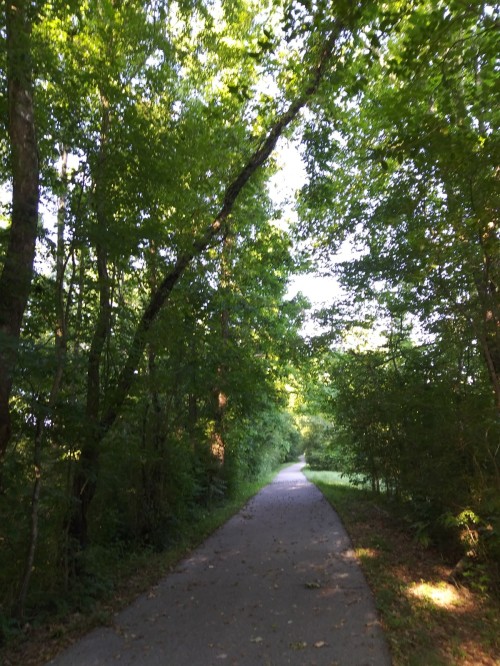 This morning, I saw Bill again, the volunteer who had trimmed the bushes along the trail.  This time, he came with lawn maintenance tools to get the weeds in those places along the trail that the riding mower missed, especially the rocks on either side of the east entrance.

We chatted, and he told me how to get information about all outdoor activities in the area.  And then I realized it was getting hotter, and he needed to do what he came to do, so I said goodbye with a smile.

Taking action had made a difference.  It doesn’t always, and those are the times to let it be what it is and move on.

If something bothers you, find a way to take action.  It feels so much better than complaining.