The Irony of Life, Part 20: Accepting What IS

It doesn’t matter than I meditate daily, that I’ve been a psychotherapist, or that I have taught stress management workshops.  When IT happens, there is only one way to deal with it:  let it be what it is.  Like they said in a favorite novel, “I will face my fear and let it wash over me.”

I must not fear. Fear is the mind-killer. Fear is the little-death that brings total obliteration. I will face my fear. I will permit it to pass over me and through me. And when it has gone past I will turn the inner eye to see its path. Where the fear has gone there will be nothing. Only I will remain.― Frank Herbert, Dune.

Why FEAR?  Because there are only two feelings:  Fear and Love. When it is a conscious situation—like choosing what to do or say, we can choose one.  But overwhelmed by loss, the only real choice is to let the body process the feelings without the mind’s comment or judgment, to simply witness them as they pass through us.  If we don’t, we live with that grief for the rest of our lives, attracting more experiences with the same bad feelings.  “Resistance is futile” (The Borg, Star Trek Next Generation, TV series).

Sometimes it’s OK
if the only thing you did today
was breathe.
–Yumi Sakugawa 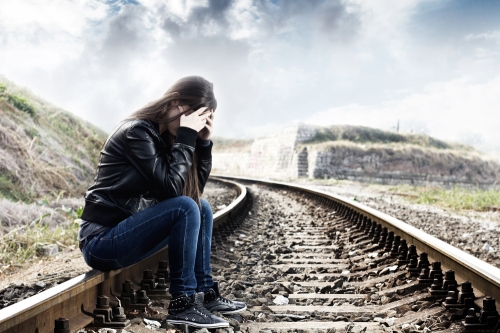 After six more weeks of denying my feelings, frantically searching for a house to buy, but never choosing one, I finally grieved the loss of my Durango home.  Until then, I couldn’t face it.  But when I did, it was non-stop weeping, blaming myself.

Shedding the tears released the raging anger behind them.

I was angry at myself and everyone involved in the sale of my house, including my realtor for listing my multi-family property, the only one being sold, so low that I couldn’t afford to buy another house in the town where I had lived almost fifty years.

I was angry with the buyers who broke the contract we all signed that allowed me to stay in the house as a tenant until I found someplace to live, a contingency added when I first learned about the coronavirus in mid-February.

I was angry with the virus that prevented people from showing places I might have rented.

I was angry with the crook who committed internet fraud by claiming to be the owner of a house listed for sale on Zillow for the time it took to file claims with the police so I could file a claim with the FBI–time I could have used to find a place to live.

I was angry with my new tenant for taking sides with the buyers.  I had introduced him to those young men because they were all contractors and I thought they could help him get started on his dream to build geodesic domes in Durango, the dream he told me about when I took him to lunch.

I was angry with all of them for violating the Governor’s Order for NOT doing business unless it was required to mitigate COVID-19, like police, hospitals and staff, and pharmacies.  Threatening to paint my bedroom while I was living there, when it was snowing, was only the beginning.  After that, it was their “need” to fix something outside my second bedroom window, which, they said, required access from the inside.  It did not.  The downstairs tenant fixed it from the outside, where “the problem” was. There was no problem, only old stucco.

I was angry with the new owners for their harassing emails and phone calls, threatening to change the locks on my apartment and on garage doors so they could “take inventory” of the stuff inside.  Everything in my apartment and the garage belonged to me!

I was angry with them for telling me to never again speak with the guys downstairs; I rented the apartments to those tenants.  We greeted one another, they borrowed things from me, and I always got things fixed on the same day, even if it happened on the weekend when it cost twice as much. I even kept one from being arrested for dumping a piece of his furniture on a neighbor’s property.

I was angry with the tenants who avoided me after everything I had done for them.

I was angry about the buyers posting “Notice to vacate” signs on my door, not once, but several times.  And the policemen who said it was a civil dispute, not theirs to do.

I was angry with the impotent lawyer who charged me $500 to email a letter to the buyers explaining the contract they signed, especially when I was the one who collected all the documents he needed for the letter.  And my realtor when both men said I needed to get out ASAP because it was dangerous for me to stay, despite our contract stating otherwise.

And I was angry with the man who brought me here for renting this house with so many things wrong, including fleas in the carpet.

And I didn’t know how angry I was until “the happily married grandfather” who found me a place to live, flew to Durango in the nick of time to drive the U-Haul to his state, and got me there safely, called to see how I was doing, and everything I said was negative.

I was projecting all my anger onto someone who was softspoken and kind, someone who helped me!  I definitely was not myself!

After I faced my anger, the tears came back…briefly.

I responded with this mantra: I did the best I could with the information and guidance I had!

And then came the truth.

I did not make a mistake in selling my house!

I did make a mistake in letting the realtor list it before I had gone through all my stuff and gotten rid of everything I didn’t want, even if it meant paying the city for another special trash pick-up as I did when I cleaned out the garage.  He said I would have all the time I needed.  I did not. I spent all my time trying to find a place to live in four different states without success because of the Pandemic.

I did make a mistake when I let the realtor list it for less than it was worth.  Had I listed it using his verbal appraisal, I could have bought a house in Durango as soon as the closing check for my house was deposited

I did make a mistake when I checked the box allowing my realtor to also work for the buyer when he said, “You’ll only pay one fee instead of two.”  He played both sides and prevented other realtors from showing it by delaying the MLS listing.  Because he did, a long-term neighbor and friend whose wife is a realtor chose to blame me; we are no longer friends.

Repeating this all day every day, “I did the best I could with the information and guidance I had,” has finally allowed me to forgive myself for not learning what I should have learned about selling my house.

On my 76th day here, I am finally opening boxes.  I will choose what I want to keep and discard the rest.  I will repack them and be ready to move as soon as I find the place I want to be.

Or, as an Aussie friend suggested, perhaps I’ll buy a van and spend the rest of my life cruising with two cats wherever I want to go, despite the Pandemic.

“Please be kind to everyone you meet, for we all have our hidden sorrows.”
– Pam Young

This entry was posted in life, personal growth, Personal Journey and tagged acccepting life as it is, accepting what IS, ethics in real estate, facing fear, grieving, impotent lawyer, moving during the Pandemic, moving on, real estate contract contingency, realtor. Bookmark the permalink.