Having grieved for a week about the circumstances of my relocation, I decided it was time to let it be what it is: “where I am now.” It’s time to move into the house I rented and just BE for a while.

Unpacking is a new experience.  Almost thirty years ago, when I moved to Canada, I had an inside-house garage sale for three days.  I sold everything that didn’t fit in my van or on the two pallets in a friend’s garage in Farmington, NM.  I would have done the same this time but the new owners and the Pandemic scare didn’t give me the time or opportunity to do it.

This 13.5 x 11′ kitchen in my rented house doesn’t hold what mine did at half the size, despite the number of cabinets.  Most of the space isn’t usable. 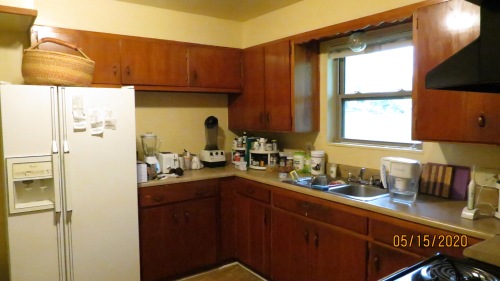 In my attic apt. I used wall space for storage: a magnetic strip for knives, a pot-hanger over the stove for pots and pans with their lids, and a board with little posts for potholders and commonly used kitchen tools.  Sadly, I ran out of time to bring the pot hanger with me.

My best friend had created even more space by replacing the corner cabinet by the stove with open shelves underneath and shelves on top.

He also turned the 8×10’ second-bedroom closet into a kitchen counter with a wide drawer, space underneath, and shelves.  I had so much more storage space in that tiny kitchen than I do now!

How I miss that kitchen!

Growing weary of food bars and eating junk food, I finally decided to leave my books in their boxes so I could use my bookcases in the kitchen.  That gave me storage space to continue unpacking kitchen boxes. 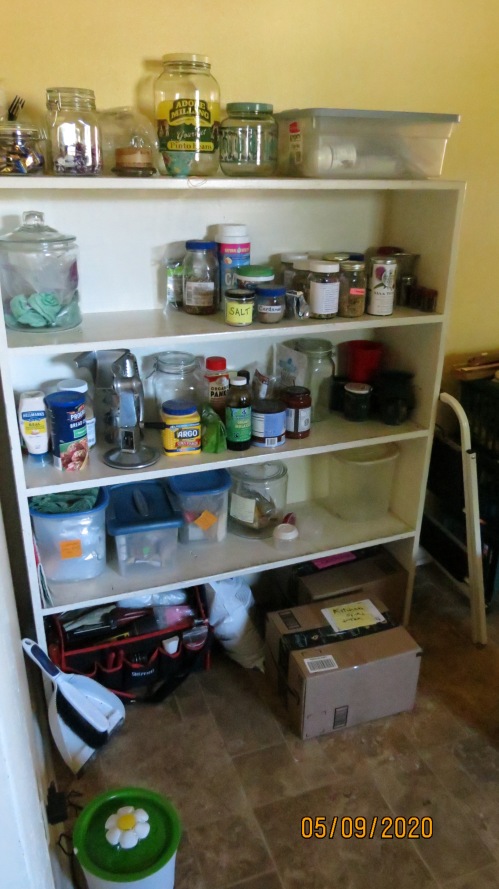 Now I can make what my body wants:

I like the location of the house:  just a few blocks from town, as I was in Durango.   One block away is a corner park with “trails”—sidewalks around and through it. It takes about twenty-five minutes to walk all that from here.  I am a five-minute drive from Wal-Mart where I bought a kitchen sink dish drainer, flatware holders, shelf liners, and a TV stand which is still in the box–all things I already had but tossed when I moved for lack of time to pack them.

The four grocery stores combined carry just enough organic fruits and vegetables for me.  Wal-Mart has the most, including Amy’s frozen pizza and Ezekiel bread!

When my Arkansas family man took me on a tour, I got to see the lake, which is huge!  All those beautiful pine trees hide it unless you’re on the road that crosses the dam.  According to a water engineer from Boulder who lived in my triplex two years ago, Durango’s water supply is…at risk.

Even in town, there is so much green around me unlike Durango, Colorado.  I noticed in the Durango Herald updates that wildfires fires had already begun.

I’ve been to the garden center and grocer on the top of the hill that carries seeds, nuts, treats, and all manner of foods canned in jars.  They even have freshly ground peanut butter and locally baked bread.

And my Arkansas family man has a brother who has a farm!  How cool is that?

A new friend said she knows good places to walk and will take me there.  And that she has moved fifty-five times and it always took three months to unpack.  That made me smile.

I am choosing, finally, to do personal things on the weekends—like writing and contacting friends—instead of constantly working.  I’m also finally sleeping for more than two or three hours/night, which I hadn’t done in almost three months.

I’m enjoying Heber Springs.  It was sixty degrees when I went shopping for groceries on Friday, May 8.  And the forecast for that night was 44 degrees.

So far, I like the humidity.  My cats are silky.  My skin isn’t bleeding from all the “Colorado dry air” cracks on my fingers.  My hair and skin are softer.  Towels and bedsheets are softer.

In Durango, I watered weekly the Ponderosa Pine Tree I planted thirty–nine years ago.  My neighbor’s elementary school son brought the Arbor Day twig over; theirs was a rented house; he couldn’t plant it there. 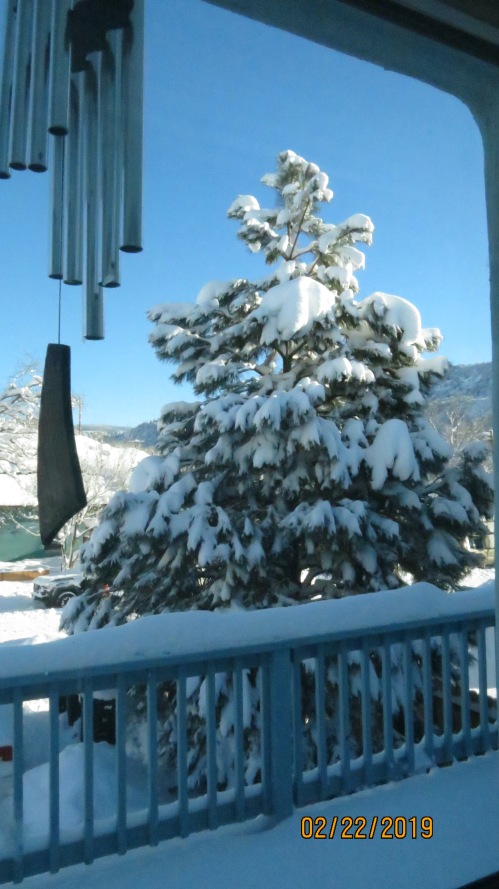 Every time I sat at my computer, I saw it out the window and watched it grow taller than a two-story house.  I love that tree.  I’m fairly certain the new owners won’t water it.

And they will never see the beautiful gardens of irises, tulips, and fragrant bulbs I planted and cared for because they hadn’t done anything in the yard before I left at the end of April and this was a light snow winter.  Those gardens require attention beginning when the snow melts.

But I am no longer grieving.

I wanted a new adventure, and despite the horrific way it happened—getting evicted by two greedy young men who disregarded not only our contract but also the Governor’s Stay Home Orders—I can finally let it go and move on with my life.

I know the house and even told them “If you’re good to her, she’ll be good to you.” I listed everything in the full disclosure I’m sure they didn’t bother to read.  I know what they can expect in the next few years, beginning with a $12,000 replacement of the clay sewer line because I’m certain they won’t put the root killer in the downstairs toilet closest to the sewage line as I did every six months for thirty-nine years.

From forty years of journals, I know that everyone who has been ugly to me has always had an even uglier experience later.

Knowing those things helped me through my grief.   And repeating this verse  daily for a week pushed me over the grieving finish line: “Vengeance is mine, sayeth the Lord.”

Now I’m ready to move in and begin my new adventure!

Till next time,
Please be kind to everyone you meet, for we all have our hidden sorrows. ~Tzaddi