I posted this quote from Joe Vitale on Facebook and it raised some questions about the meaning.

The entire world
is a projection
of what you feel inside.
~Joe Vitale

The concept of “mirrors”–that what we see outside ourselves is a projection or a mirror reflection of what we feel inside–has been explored before in this blog.  Here’s one of the first posts about it.

Just about the time I felt really comfortable with the mirror game—that whatever I perceive outside myself is actually a “mirror,” a reflection of my inner self—I saw a two-part video by Gregg Braden called Walking Between the Worlds:  Understanding the Inner Technology of Emotion in which he presented an ancient version of mirrors.

According to Braden, the Essenes wrote about seven mirrors.  Because seven, the number of perfection, is a sacred number in many cultures, I took notes.

The first two mirrors were old news and dealt with what we are and what we judge in the moment.  Looking into judgment requires noticing what offends us.  Let’s say one has an emotional charge around honesty—that they have a really strong opinion that honesty is the only way.  Hypothetically, they’ll see that reflection in personal events like being ripped off.  When I heard that, I immediately thought of the Spring Break when I took a friend to a beach in Mexico.  He had never been there, but he had a strong attitude that we’d better watch our stuff.  He said that to someone who doesn’t lock her doors.

Sure enough, we were sleeping in the back of my truck with our heads on the tailgate and our shoes by our heads.  The next morning, his new shoes were missing, and from the cab of the truck, the locked cab, my (unisex) hiking shorts and twenty dollars were also gone!  Because I had never been robbed before, despite sleeping under bridges with the sliding door of my van wide open so my cats could come and go, I wanted to believe the theft was caused by his belief and expectations about “how it is in that part of the world.” That also seemed to fit what Braden was saying.

Braden suggested that once we understand how things happen in our lives, once we really understand how a particular issue works, we can actually heal it in all areas of our life.  I found myself wondering if that is somehow related to the “Seven Generations” lawn sculpture at Omega in New York—that if we healed our own issues, would the healing go backwards and heal seven more?

The third mirror of the Essenes happens when we have a magnetic attraction to someone, when we feel as if we’ve known them all our lives.  The familiarity we’re feeling is the recognition of some part of ourselves we have lost, given away, or that was taken from us.  He cautioned, “So before you jump into bed with that magnetic new partner, consider determining what part of yourself you see in them.”

I tried this when I felt swept away by a stranger from out of town.  Devastated by his return to wherever he came from, I searched for that part of myself I saw in him and found it.  It was his passion for life.  I had lost that some years ago when I no longer had enthusiasm for the job I had done almost twenty years.  As I think of him now, I see myself, exhilarated by life and all the magic that somehow I had lost.  In our brief encounter, he gave that back to me because now I know how to claim it for myself.

But what about lovers who were drawn together magnetically, married, and then discover one day the “oomph” is gone?  Braden suggests it’s because they have healed that lost part of themselves, but may choose to continue the relationship because it works.

Patterns of compulsive or addictive behaviors are the fourth mirror.  Through addiction or compulsion we are giving away what we hold most dear.  We rearrange our lives to accommodate our compulsion.  Although Braden’s explanation wasn’t enough for me, I have thought about it since and believe this mirror could be related to the third “lost part of myself” kind of mirror.  That is, one might ask, “What part of myself am I giving up by having this compulsive or addictive behavior?”

The fifth mirror, about our parents, was the most profound for me.  Braden says that what we’re seeing as we look backwards at our parents in the past, or even now, is the reflection of our relationship with our God.  If our earthly mother and father are surrogates of our heavenly “parents,” then however we view them is a reflection of our relationship with God.

The sixth “mirror” is the dark night of the soul.   Here, we are reminded that life presents us with great challenges until we have the skills to get through them gracefully.  We see ourselves naked, having lost everything, but there is a dawn of new life on the other side.  Then we see ourselves in a new way.

Finally, the seventh mirror of the Essenes asks us to allow for the possibility that everything in life is perfect—including the undernourished third world country children, including the arrogant boss who punishes subordinates because she is jealous of their intelligence,  including the missed plane.  Unless we compare our lives, ourselves, to someone or something outside of our experience, how can we come up with anything but perfection?  Braden says the only way that can happen is if we did not do our best, or if we compared ourselves to anything or anyone else.

According to Ramtha, God is everything, everything is God.  How can a part of God not be perfect?  Hence, the saying, “It’s all good.”

I fought that throughout graduate school with my ever-patient aunt who had been a missionary in Africa.  It wasn’t until so many years later, when I saw the matrix, the overlap of energy fields of everything and everyone, while camping with Huichol Indian shamans in Mexico, that I could begin to understand it.  I wrote about it in my BURNOUT  trilogy. 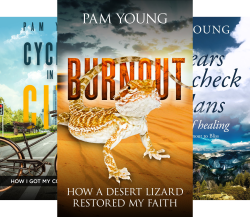 The mirror game isn’t about other people.  They only provide the mirror for us to “see where we are now” so we can heal ourselves, and possibly others before us.  It’s about accepting that “It’s all good” and teaching us to quit judging others.

Have you used any of these versions of the mirror game?  If so, what has been your experience?

(Image with Chodron quote:  from Sun Gazing on Facebook)

Please be kind to everyone you meet,  for we all have our hidden sorrows. ~Tzaddi