I left the cat door open again last night because Bella didn’t come inside, and I was too tired to go down the stairs to get her.  One of two feral cats I adopted five years ago, she’s still torn between having a home and having complete freedom.  And so, for the second time this summer, an intruder came in through the cat door. 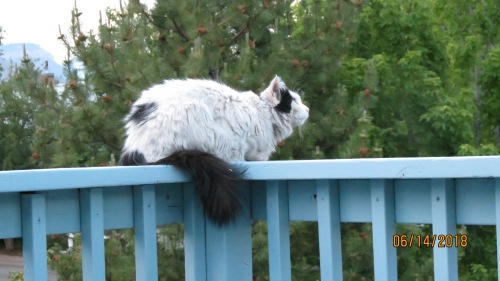 Watching birds on the roof next door.

I typically remove pet food from the floor if I leave their door open.  But this intruder was smart.  It saw the flat of canned cat food on the floor under a box of books in the living room.  I thought, Surely this heavy box will dissuade it from even trying.  I underestimated its intelligence and strength

The intruder just knocked the box over.

If it was a raccoon, it might have had help.  There have always been at least two.  A few years ago, as I was taking the trash out to the bear-proof dumpster, a whole family was coming up my stairs.

Raccoons had once spilled gallon jars of grains and beans everywhere, and even tried to drag my cat’s bed through that tiny pet door.

Whoever this intruder was, it removed the box of books, revealing a flat of twenty-four cans.  But it didn’t destroy the flat or even rip off the plastic.  It clawed through one corner of the box and took one can out.

I found that empty can and lid right outside my front door.  It was squeaky clean.  My heart went out to the intruder who might even be my neighbor’s cat.  When the aunt moved in, the cat was moved out, and they no longer feed it, just as ignorant people, including college students, leave their pets behind when they move on.

This was a test:  Will my other adopted feral cat, the mighty Kali who has chosen to be a house cat, defend her home as she does the deck and stairs, the only entrance to this tiny apartment?

Not if the intruder got inside!

And I am grateful for that because the last encounter a cat had with an intruder was nearly fatal.

The next morning, I found that him cat bleeding in my bedroom with a gash so deep in his belly he could have died there.  His body was covered with wounds. The vet did what she could, said he might survive, and, “You’ll have to nurse him, because we’re not set up for that.”

I made cat food for the syringe.  Holding him in one arm, I squirted the liquid food sideways through the gap created by missing teeth he lost in the fight.  It went into his mouth and all over me… I fenced the bedroom deck so he could go outside safely.  (Photos were taken months after the surgery.)

Sitting with him on that tiny deck.

He survived to live a few more years… 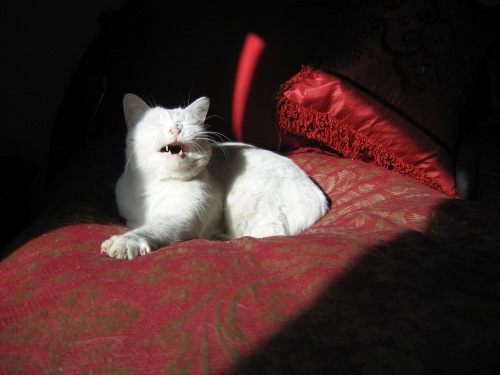 …until his colon got blocked, a consequence of the surgery.

Close your pet door at night, even if you live in town, because starving critters will do what it takes to survive, including killing your pet.

“Please be kind to everyone you meet, for we all have our hidden sorrows.”  ~Tzaddi

This entry was posted in life and tagged cats, pet door, protecting your pet, raccoons. Bookmark the permalink.

2 responses to “Close the Pet Door”