“Baby Ducks”:  the Art of Re-framing

An astrologer nailed my weakness when he advised me to “Be less bothered and nothing will bother you.”  The desire to be imperturbable was, in fact, why I was so keen in learning how to meditate properly in 1990.  Sadly, my habit became intermittent over the years, and I was finding it difficult to live in this small tourist town.

For example, while trying my best not to hit the unconscious people walking or biking across the busy streets, I had a new flash from the Cosmic Cops (aka, “my guys”) who watch over me:  “Re-frame!  They’re doing the best they can with their level of conscious development.  Treat them as you would baby ducks!”

That got my attention because for the past several weeks I’ve been treating myself as my client.  As a psychotherapist and workshop leader,  I taught my clients skills like Neuro-Linguistic Programming (NLP) which includes the remarkable “re-framing” tool.  My “guys” know that and they know how much I love to watch the ducks on my River Trail walks. 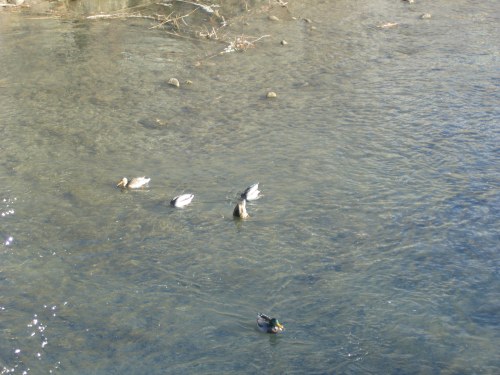 That simple act of re-framing the experience, made me smile.  I felt my heart expand with so much love.  Even the experience of missing an open parking space at the Farmer’s Market because a tourist was coming the wrong way out of the lot was dismissed with “Did my best, and now I’m going to the Natural Grocer.” I just smiled and thought “baby ducks.”

I did not feel tense, and I was not spewing those words or having those thoughts.  I felt calm and looked forward, instead, to a quick stop at the health food store.

I skipped the first parking space because that’s where my car was parked when an out of state, hit-and-run driver rear-ended it.  Instead, I thought, “baby ducks!” Even though my old Honda Civic has been rear-ended three times, I did not re-experience the anger about yet another tourist bashing my car.  “They’re doing the best they can.  They’re baby ducks!”

Every time I see someone being stupid or irresponsible, I now have a fail-safe response:  “Treat them gently; they’re baby ducks!”

I got enough practice on the way home to believe the re-frame was “fully installed,” just as the response to my own unconscious behavior was.  For example, I used to feel anger when I’d drop a box of sewing pins on the carpet or spill water near my computer.  Now, when I do that or anything else stupid, I laugh out loud.

I used to make myself crazy with self-judgements just as I did with my judgements about other unconscious people.  Now, the instant laughing is the automatic response to everything that once made me angry.

Allowing others to be however they are–even when they’re walking or cycling against the light or obliviously chatting in the parking lot entrance, blocking a car’s turn into it from a busy street–creates space for me to be who I am.  We all make mistakes.