During recovery from multiple fractures in two bones of my right arm, I spent hours watching movies.  I couldn’t hold a book or Kindle, but I would have chosen films anyway.

I’ve always loved movies, the biggest classroom there is, and even wrote a screenplay,  Hot Licks & The Bag Lady, for the Telluride Film Festival years ago. My play was a finalist and I won a pass for all the movies at the festival!

As an extreme introvert (according to the Myers Briggs psychology test), I connect with the characters just as I do with my friends on Facebook because I don’t see them in person either.  I have huge respect for Meryl Streep, but don’t know much about her (except that she has proven with her amazing career that she can play any role).  Therefore, I do not consider her a “friend” because I don’t “know” her.  But I just read Jennifer Lawrence’s biography on imbd.com and from her quotes, I believe we could easily be friends.  Besides, she’s also left-handed!

The best movies are like the best novels: they depict humanity’s struggles and how we overcome them.  They do not rely on the “F-word” for coolness or nudity or sex for interest.  Instead, they show important issues and choices that real people face.  Those are the ones I buy and they represent all genres!  At the same time, I confess to watching a “men killing men” film when I’ve had a bad day, but I don’t want them in my tiny space (except The Shooter and I’ll explain why when I write about it). 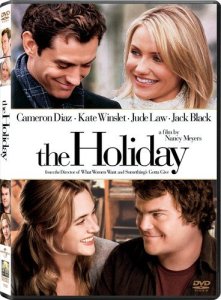 As a major film buff, I can watch the same film over and over and enjoy it more each time.  I fantasize about living in Amanda’s house (The Holiday) with her amazing wall of films.  One of my college students worked at the local movie theater; she tallied how many times I watched STAR WARS (the first in the series that came out in 1977).  In those days we didn’t have internet or DVDs.

I began buying films when I observed that my subscriptions to Amazon and Netflix don’t always work for people like me because they’re trying to satisfy everyone, not just people who prefer character growth or who want to see the same film over and over again.  (They change their offerings!)

So why did I write about this?  Because I’ve decided to continue my blog!

The accident last October prevented my creating a new, spiffy-doo-dah blog, and so I continued this one, with changes.  The content will be 500 words or less (not my 1,000 word stride), and I’m adding two categories: Film Reviews of a different sort and Guest posts by fellow writers.

Of course, I’ll continue the original purpose for the blog:  to share personal essays about Life (mind, body, spirit – the triangle of human existence).

Please be kind to everyone you meet for we all have our hidden sorrows. ~Tzaddi