This series is about working to clear clutter in a two-car, dirt-floor garage with a 27-year-old drifter I hired to help me (and him).  I first met him two years ago when his pal was flying a sign — “Will work for money” — at the Wal-Mart exit.  Here, I call him Heathcliff (from Bronte’s Wuthering Heights), or, when he’s having an “UP” day, I call him “Heathy.” But when I’m challenged by his behavior, he’s The Drifter, the guy who chose to be a “man without a home.”

He did not show up by 10 a.m. as planned.  In fact, he didn’t show up at all.  My phone showed several calls from him and a garbled message.  I’m guessing he was driving because his voice was muffled. I tried several times to call him, within minutes after he called but he never answered, and I could not leave a message because his mailbox was full.

I worked by myself until noon.  The handyman came by and gave me the invoice for his two jobs – fill cracks in the cinder block walls with mortar and rebuild the fence that was removed last summer.  He asked about The Drifter and said, “When you hire someone like that…”

But the handyman also said he’d have his son phone me tonight about working with me tomorrow.

I realized I could not complete today’s tasks by myself in time for Spencer’s Junk Pick Up tomorrow morning at 8 a.m., and so I canceled it.

That led to asking myself “What is really important here?” and “What are you afraid of?”

This project was way too big to do alone, especially with a timeline set up by factors I had no control over, like appointments made with contractors:

Given the timeline, I was careless when I chose to tackle a project like clearing clutter from a two-car, dirt-floor garage that had never been cleared before.  Sure, I tended the pallets of my personal stuff, but I had never taken on the entire garage and all the stuff I’d acquired to do the maintenance myself for over twenty years.

So why did I put myself in that situation?  Because a man I met three years ago signed a piece of paper stating that he would go the distance until all tasks meeting those deadlines were completed.  I had taught planning; my weekly and daily work assignments were typed and stated in past tense for motivation.

But you can’t plan when you have a Drifter for an employee. I won’t make that mistake again.  (And what came up for me were the other men who were not drifters who had signed papers swearing they would “go the distance” but didn’t.)

At 8:38 a.m., the handyman dropped his son off to help me.  I gave the son my keys so he could get the fence stain from my car, and I logged his start time.

When he was set up with everything he needed, I went back upstairs to make a shake for breakfast.  But then, I sensed HIS presence.  It was the Drifter, standing with his back to my window on my front porch.

I opened the door and said, “Why didn’t you knock?”

He replied, “I moved the wind chime.”

“You and the wind.  Next time, please knock.  I’m heating water for coffee.  Want some tea?”  He nodded, and I went inside knowing that he’d stay on the porch because he hadn’t showered, and I have been clear about personal hygiene as a prerequisite to entering my tiny apartment.

With his unexpected arrival, we definitely were going to talk “off the clock” before I let him work.  So I made my coffee with the filtered water I’d heated before he arrived, filled a mug with tap water and nuked it for 2 minutes, and then joined him on the porch.  When I handed him the mug, he opened his palm to reveal a small batch of mint leaves he’d taken from the garden.

I sat down with my coffee and said, “You didn’t show up yesterday.  As a result, I  I had to cancel Spencer’s pick up for the dump because you weren’t here to help me.  I saw that you phoned, but your speech was garbled, and you didn’t answer my calls.  I couldn’t leave a message because your mailbox is full.  So what’s up?  Are you done with this project you signed up to do?”

He told an unconnected story about an old vet who more or less picked him up so he (the vet) could get laid by two girls in the bar and the court appearance because the older guy lied to him about the tab, and he, not the vet, was asked to pay it but he didn’t have the money….

The morning was moving on.  I said “Are you here because you want to work?  Can you be here every day for the rest of the week?”  I showed him the paper he had signed, listing the tasks and deadlines, and he said he would.

He said he would.  And I believed him because now he understands why I needed the commitment.

I told him to go ahead and get started. I’d be right behind him.

Heathy had opened the garage door and was checking stuff. 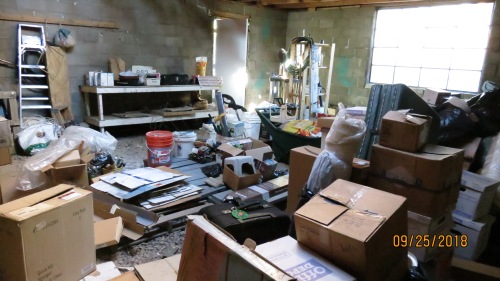 He might have noticed that I had boxed all the stuff he had taken from the shelves and just set on the floor.

He might even have noticed boxes missing.  I had made several trips to Thrift Stores with donations in those days I worked alone.

But today, Heathy worked hard, doing everything I asked him to do:

He emptied shelving units, took them outside and cleaned them, and set them in the sun to dry.  He moved pallets to the yard for my stuff.  He even chatted with the boy staining the fence while they worked.

When the handyman’s son finished, he cleaned the tools and put them where he’d found them.  I paid him, and his dad appeared in the parking lot to take him home.

After lunch, Heathy did what I asked him to do; he moved boxes of stuff outside, arranged them on two pallets, and covered it all with a tarp and my old climbing rope.

And, using the 1992 Subaru given to him by the vet, he delivered all the stuff marked for Habitat Restore by himself!  Meanwhile, I took a load to the Humane Society Thrift Store and went to Home Depot to learn the best way to make gray cinder blocks white so it would add light in the “garage with no electricity.”

It was a good day, and all was forgiven.  I finally accepted The Drifter for who he was:  a drifter, not someone I could depend upon like the handyman and his son.  It is what it is.

“Please be kind to everyone you meet, for we all have our hidden sorrows.” ~Tzaddi, a.k.a., Pam Young

This entry was posted in life, personal growth, Spiritual Journey and tagged "Allowing, "man without a home", accepting, clearing clutter, hiring the homeless, homeless man, The Drifter. Bookmark the permalink.

2 responses to “The Drifter, Part 6: Abandoned!”